Avoidance learning procedures involve subjects learning that certain aversive events are predicted by specific environmental stimuli. This protocol is for assessing the associative learning and memory of zebrafish.

In the following zebrafish version of the task, fish must learn that a specified visual cue (e.g., blue light) predicts an aversive stimulus (e.g., mild electric shock) (Brock et al., 2017; Kenney et al., 2016). This type of task is a robust method which assesses associative learning and memory, and it is reported to be impaired in many psychiatric disorders, such as anxiety disorders and schizophrenia and in neurodegenerative disorders, such as Alzheimer’s disease.

The visual stimuli are presented from the integrated screen below the testing tank (see image below depicting green and blue colours on the screen). The stimuli can be comprised of colour, shapes, stripes, or bitmap images.

Fish are initially habituated to the tank, and then tracked to establish baseline preference for the environmental stimuli. Both stimuli are presented for baseline measures, the screen below the tank is split to display green and blue colour stimuli.

The conditioned stimulus, an all blue screen, is paired with a mild electric shock, followed by the presentation of the non-conditioned stimulus, the green screen. Stimulus preference is then measured in a probe period following conditioning when both green and blue colour stimuli are presented on the screen as illustrated below.

The screen below the AD tank will display green and blue colour stimuli during the baseline and probe periods, as illustrated in this image captured during a study. 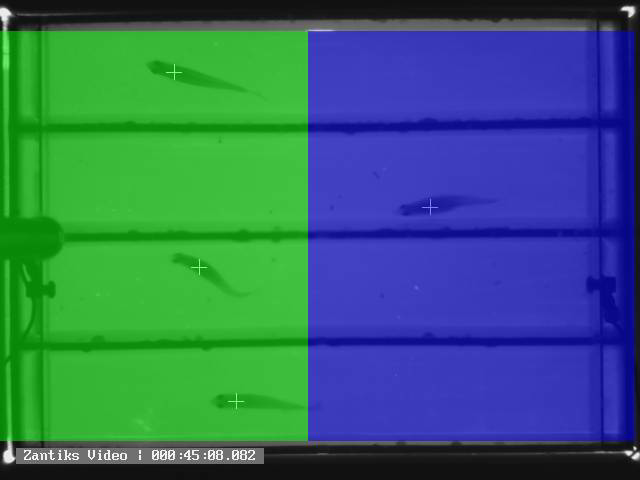 The conditioned stimulus preference scores are the main behavioural endpoint analysed in this task. Preference towards the CS is determined in the same manner for both baseline and probe calculations. The proportion of time spent in the vicinity of the CS is calculated for the preference as: Total time in CS / (Time in CS + Time in non-CS).

The short experimental test illustrated below, demonstrates the kind of data that you can collect in real time. In this demo two fake fish, singly housed in two arenas, swim over two different coloured zones. You will note that fish 1 (in Arena 1) prefers the green zone.

The zanscript for this experiment included commands to collect data on the movement of each of the two fake fish in two different coloured zones in their arenas, during two intervals (periods), and detailing the distance travelled (measured in pixels) and time spent (in seconds) in each zone as well as counting the number of times the fish entered each zone.