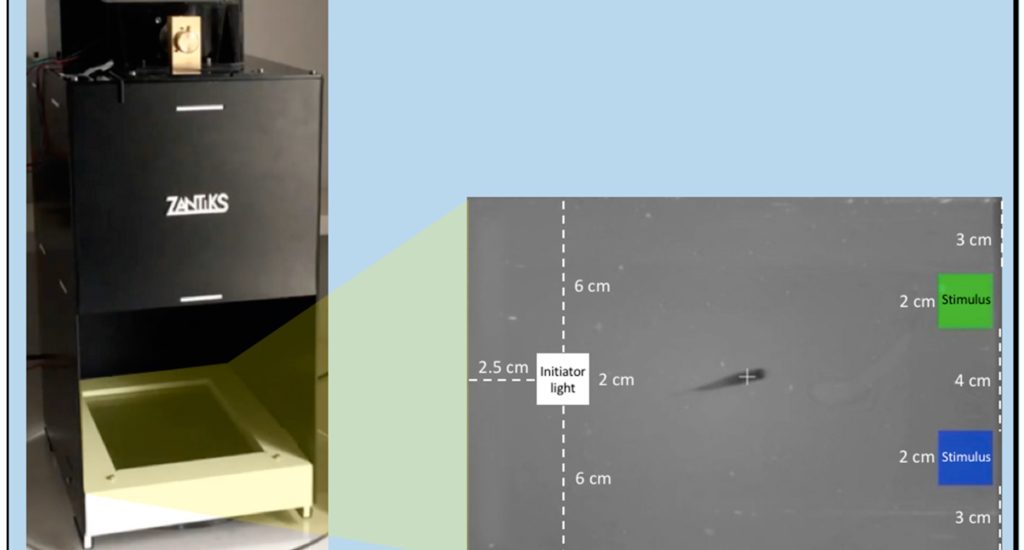 A new paper, published in symmetry this month, used Zantiks AD units to test if brain lateralization may influence side biases in a 2-choice test in a zebrafish model.

Petrazzini et al., from the University of Padua, used a spontaneous choice task (a detour test) to assess the direction and degree of brain lateralization. In a detour test, subjects typically swim along a runway until they encounter a dummy predator behind a barrier. Fish show spontaneous preference for the use of one eye over the other in the presence of a threatening stimulus. This behaviour is measured by the subject’s swimming direction upon leaving the runway towards a fake predator. This behavioural bias, or lateralization, suggests brain asymmetries in eye use.

Researchers followed this test with an operant conditioning task (2-choice discrimination task) to assess whether the lateralized individuals (as seen in the detour test) are more likely to exhibit side biases than the poorly lateralized ones when required to select between one of two colors presented on a left–right axis. In the colour discrimination task, subjects were required to discriminate between two rectangles differing in colour (one on the right and one on the left) in order to obtain a food reward.

Using the Zantiks AD units, Petrazzini et al. state that they were able to achieve extensive training comparable to that used with mammals and birds. This allowed observation of whether side biases are acquired throughout the experimental sessions because of the prolonged presentation of stimuli, or if they are pre-existing.

Comparing the behaviour in the detour test to the choices for one side of the experimental tank during the colour discrimination task revealed a strong positive correlation between brain lateralization and the tendency to repeatedly select the stimulus presented on one side of the tank. In other words, any side bias observed in the colour discrimination training task was related to the subject’s brain lateralization observed in the detour test.

Researchers suggest methodical implications from their findings as, even after 500 trials, subjects could not inhibit their tendencies to swim to the preferred side of the experimental chamber. With current assays not taking into account any brain lateralization effects, results may be interpreted as ability or inability to perform cognitive tasks, which may indeed not be the case.