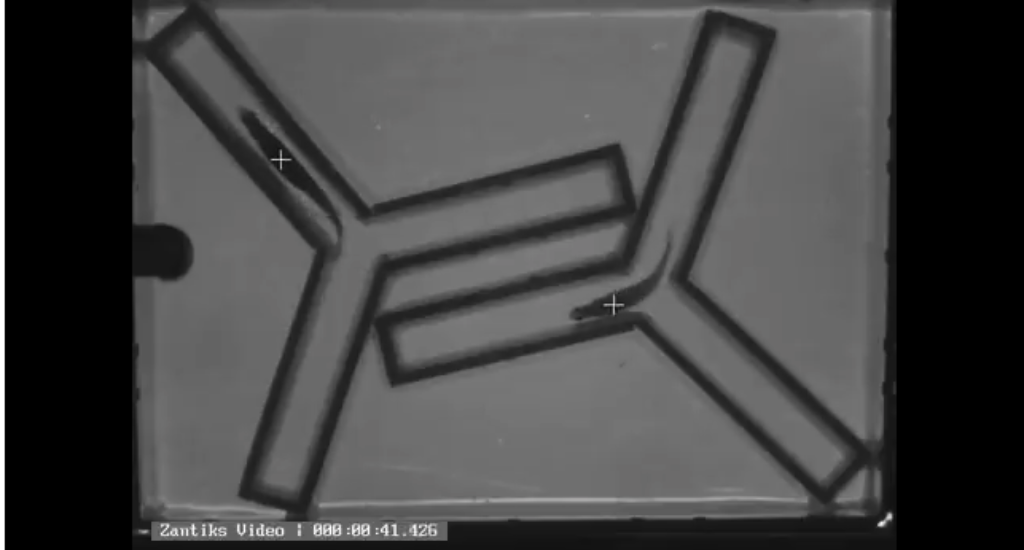 It is exciting to see how Zantiks AD units enabled Dr Matt Parker, and his team at the University of Portsmouth, to conduct a variety of learning and memory experiments on zebrafish as part of one research study.

Dr Parker said, “We have been trying to develop automated behavioural tests for many years, and have used various different in-house and commercial systems for this. The Zantiks AD units have allowed us the flexibility to carry out many different protocols within a controlled and reliable environment. The Zantiks AD units have also allowed us to increase our throughput. This meant that we were able to test multiple fish in a single run, giving us the ability to generate a lot of data in a very short period of time. The other benefit of the Zantiks AD units is that is facilitates one of the ‘3Rs’ of model organism research. Specifically, having the ability to reduce variation in testing means that we reduce the numbers of fish needed to test our hypotheses. In short, the Zantiks AD units have been a real game-changer for us!”

Parker’s new preprint, just made available via bioRxiv - Moderate developmental alcohol exposure reduces repetitive alternation in a zebrafish model of fetal alcohol spectrum disorders - describes how three learning and memory protocols, for appetitive and aversive learning as well as spatial alternation, were carried out on 3-month-old adult zebrafish exposed as embryos to low levels of alcohol, in the isolated chambers of Zantiks AD units.

During the appetitive learning task each AD tank was set up with a feeder insert and fish were trained in two phases. Initially the fish associated the noise of the feed dispenser with delivery of a small amount of ZM400 feed. Subsequently the fish were trained that swimming into a lit initiator area resulted in food delivery, and their learning was assessed with a probe trial.

When the fish were tested on the Pavlovian fear conditioning protocol in the AD unit, each tank was set up with 4 arenas for singly-housed fish. Two different stimuli were presented in each arena, simultaneously and sequentially, using the screen underneath the tank to ascertain baseline preference. One stimulus was a ‘check’ image (black and white checkerboard) and the other stimulus was a solid ‘grey’ colour image. One of these stimuli then became the conditioned stimulus (a full screen of either ‘check’ or ‘grey’) which was presented for 1.5 seconds at the end of which was delivered the unconditioned stimulus - a brief, mild shock produced by the AD unit’s integrated shocking plates, followed by an longer inter-trial interval during which the non-conditioned exemplar was displayed on the screen underneath the tank. Following conditioning, avoidance of the conditioned stimulus was ascertained by repeating the baseline.

A Y-maze test of perseveration and repetitive alternation was also set up in the AD units. Each tank contained two singly-housed fish, and each held in a simple y-maze with three identical arms. Fish were recorded in the unit for one hour, or until they performed 100 arm-entries, allowing for 97 overlapping series of four choices (tetragrams), of which there were a total of 16 manifestations possible. Dr Parker’s team found that the alcohol-exposed fish showed reductions in spatial alternations, suggesting subtle differences in decision making following moderate developmental alcohol exposure. See a video recording from the AD unit of zebrafish in a y-maze here.